Tufenkian Fine Arts is honored to present Sigrid Burton, a solo exhibition of recent paintings by the Los Angeles based artist. This extraordinary show will kick off with an opening reception at the gallery on Thursday, March 12, 2020 from 6 – 8 pm and will remain open through April 25, 2020.

“Burton’s paintings are performances of theatrical light, color, and space presenting apertures into realms beyond or within the everyday”, writes Michael Duncan, the Los Angeles based critic and curator, in his recent essay Sigrid Burton’s Atmospherics: The Value of Color (2020). “They conjure states/moods/thoughts/dreams that are both cosmic and corporeal, extraterrestrial and internal, charted in slowly accreted paint that is masterfully layered and blended. The paintings’ auspicious fields set the stage for loose, unfettered, drawings whose elements dangle in the foreground as evidence of phenomena from the artist’s experience and the natural world. Titles originate from the artist’s responses to her own work; all are given after the fact.”

Sigrid Burton, raised in Pasadena, California, credits her high school art teacher, the performance artist Barbara T. Smith, with teaching her that art was a phenomenon of experience. Burton earned her BA from Bennington College, where she studied with the artists Pat Adams, Carol Haerer and Sidney Tillim. After moving to New York City in 1973, she worked as studio assistant to Helen Frankenthaler and then Jaules Olitski. Burton began making paintings of pooled areas of color embellished with drawing in a generalized reference to light and landscape. In 1985 she was awarded a six week residency to study in Italy by the Rockefeller Foundation. She began a series of work exploring the Renaissance idea of the painting as a window by experimenting with the edges and creating a frame within the picture plane.

In 1991 Burton first traveled to India and in 1995 received an Indo American Fellowship from the Smithsonian and Senior Fulbright Scholar Program to study the meaning and use of color in traditional Indian art forms. Using canonical Indian color systems as a starting point, she began a series of oil paintings and works on paper based on loosely constructed systems of her imagining, including the cardinal points, the etheric body, and the seasons employing both direct observations and references from the natural world. She started drawing from botanical, anatomical, and other sources directly on the canvas, deconstructed the imagery and incorporated these in atmospheric areas of saturated color constructed from multiple glazes of layered color.

As a native Angeleno, Burton had been exposed from an early age to California Light and Space artists whose work with color and light created atmospheric environments. Light and landscape, travel, and studying antecedents in painting have been key inspirations and resources for her work. Over the years, the opportunity to see and study diverse material including Buddhist cave paintings, Indian miniature paintings, Jain cosmological diagrams, and the work of artists such as Matisse, Joan Mitchell, and Nancy Graves have informed and modulated her approach to painting. The landmark exhibition, Manet/Velasquez, and an earlier Chardin retrospective, amplified Burton’s process as she began to incorporate old master techniques involving underpainting and glazing into my paintings. Recent travel to Rome and the Netherlands to study the work of Caravaggio, Holbein, and Rembrandt has influenced use of color and light effects. Comprehensive exhibitions and collections of Indian miniature painting continue to feed her practice and technique, as have the work of contemporary artists mining Indian traditions, including, Shahzia Sikander, Anish Kapoor, and Howard Hodgkin.

Michael Duncan notes “Burton’s far-reaching enthusiasms for Renaissance and Indian art, astronomical phenomena, weather maps, calligraphy, and arcane color theories fuel her endeavor. Like the complex tones of her paintings, these sources mix and unravel. She blends notations from her own astronomical observations at observatories in Pasadena and Chile with elements taken from Hindu and Jain diagrams of the cosmos. Complexity is embraced.” 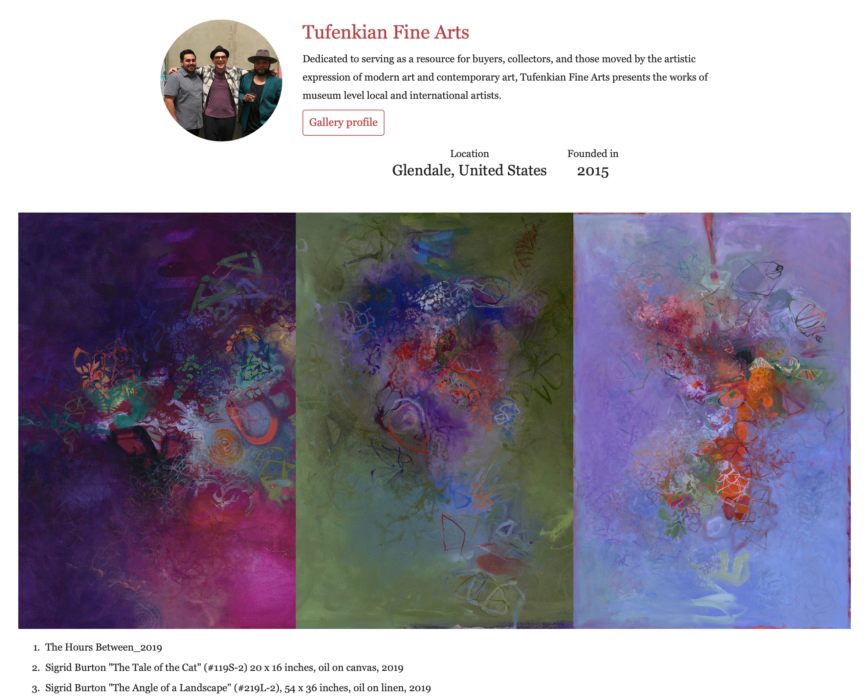