This article was originally published on August 4, 2011 in the New York Times Habitat Section.

BACK in the mid-’70s, when Sigrid Burton was a young artist living in a rented loft on Walker Street in what was coming to be called TriBeCa, she used to pore over the real estate ads in The Village Voice with almost religious fervor. Ms. Burton did this despite the fact that she was living so modestly, she used to ask taxi drivers taking her home late at night to drop her at the corner, to save the cost of circling around the block to her front door.

One day she saw an ad that caught her attention, partly because the place was being offered for sale by the owner. “That was good,” she said, “because I always hated to bother brokers when I knew I couldn’t really afford to buy anything.”

The space turned out to be a 3,300-square-foot loft on West Broadway just north of Canal Street, in a onetime printing factory built around 1890. “It was a wreck,” Ms. Burton said. “But it was also perfect.”

By perfect, she was referring to elements like ceilings 11 feet high and 360-degree views of Lower Manhattan’s warehouses and water towers from huge arched windows. She was also taken with the building’s facade, set off with granite pilasters and an Ionic capital. But although she carefully checked out the place, her financial situation left her in no position to bite.

In 1983, her thoughts returned to the loft. By that point she was on her way to becoming an established artist. She was also newly married to Max Brennan, owner of Manhattan Molds and Casts, a company that makes architectural ornament for period commercial buildings (the parapet atop the Flatiron Building is his). Thanks to the recent sale of a house she owned on the North Fork of Long Island for $150,000, she had some extra change in her pocket. And amazingly, the loft was still on the market.

The couple bought the loft for $211,000. But wreck was truly the word for what lay within. Acoustical tile covered the dropped ceilings. Shag carpeting hid the original oak floors. Fake wood paneling — “something that never helps,” Ms. Burton said — concealed the walls. The cavernous space had been chopped into a warren of tiny rooms. Nor did the couple have a clue as to what awaited them financially. “We were so naïve,” Ms. Burton said. “I’d renovated another loft for $5,000. I figured, how much could this one cost?”

Well upward of $300,000, as it turned out. And even though the renovation proceeded in stages, with corners cut left and right, the costs seemed prohibitive. “During the first renovation,” Ms. Burton said, “I thought we’d be in debt for the rest of our lives.” 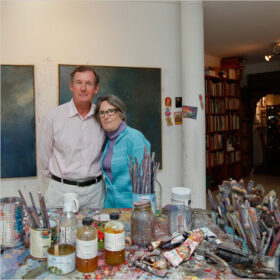 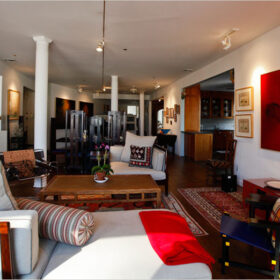 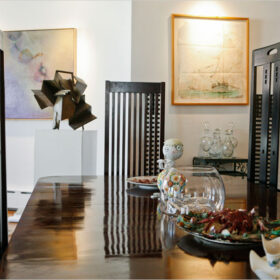 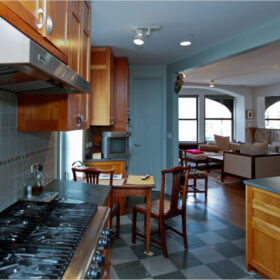 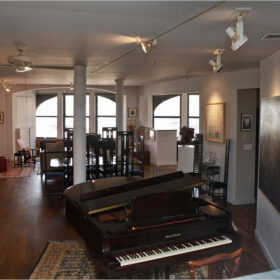 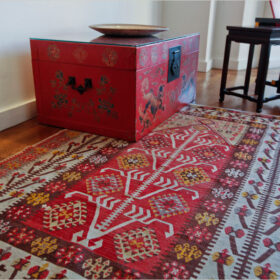 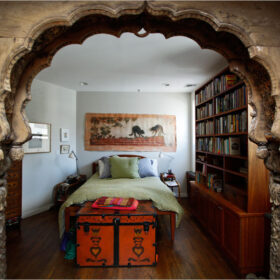 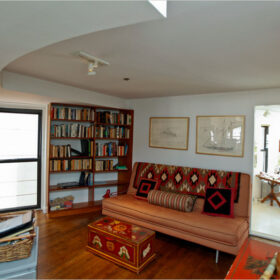 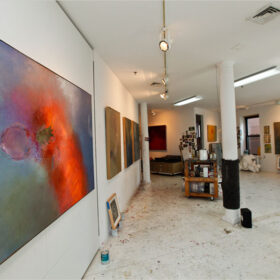 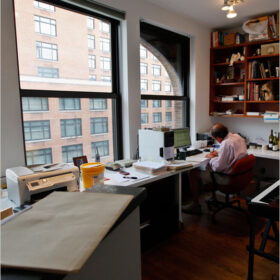 Perhaps. But thanks to inherited family treasures, extensive travels and two excellent pairs of eyes, along with the help of the architect Carl Hribar, the loft has evolved into a veritable primer on craftsmanship in its many and varied guises.

Chairs are a passion. What Ms. Burton describes as the couple’s first adult purchase are the half-dozen reproductions of Charles Rennie Mackintosh’s high-backed chairs that ring the dining table like guests with perfect posture. They are joined by copies of the Frank Lloyd Wright Robie chair — “iconic but so uncomfortable,” Ms. Burton said — and copies of Gerrit Rietveld’s Red Blue Chair, which look like nothing so much as Mondrians with feet.

The couple also love rugs. Their collection includes a traditional Tibetan tiger rug made by refugees living in Nepal — the animal’s teeth and claws bared ferociously — that is one of many finds from their extensive travels. A trip to New Delhi netted two carved teak doorways that they dismantled and, with considerable effort, shipped back home. In Rajasthan, India, they found the wooden apsaras nestled above the entrance to the kitchen — a pair of crowned and winged celestial musicians, one on cymbals, the other on drums. A selection of Indian miniature paintings from the 18th century depicts one after another delectable domestic scene. One image, known as “Lady Yearning for Her Lover,” shows a tiny young woman prostrate as her maidservants cool her down by fanning her and applying sandalwood paste to her feet.

And nearly the entire world is on display in a glass cabinet in the living area, thanks to the army of costumed dolls, among them a Laplander trimmed in fur, a little witch doctor from Micronesia, a tiny matador from Spain and a Guatemalan doll swathed in brilliant textiles. Many were childhood gifts from Ms. Burton’s grandparents, travelers as inveterate as their granddaughter.

The walls are dominated by Ms. Burton’s large abstract oils, bearing such evocative titles as “Two Wings and a Violin,” a line from a Pablo Neruda poem. Mr. Brennan’s mahogany grand piano, a Mason and Hamlin instrument made in 1935 that his wife describes as the love of his life, sits near a corner. He can often be found here, playing jazz-inflected Gershwin, Cole Porter and other classics from the American Songbook. The family cat, Miss Otis, is immortalized in a painting by their friend the artist Anne Harris that hangs over their bed. The cat is so clever she walks on a leash when the couple visit their second home in Greenport, on the North Fork, where they’ve been going five years.

Over time, the view out the apartment windows has been radically transformed. When the couple first arrived, Gwathmy Siegel’s SoHo Muse, next door, was decades in the future, as were the SoHo Grand Hotel across the street and Enrique Norten’s assemblage of glass towers, complete with outdoor pool and luxury automobiles on the ground floor.

Ms. Burton and Mr. Brennan, now 60 and 59, aren’t the sort of people who grow misty-eyed recalling the old days. Yet they can’t help but marvel at how profoundly their neighborhood has been altered.

“Back when we arrived,” Ms. Burton said, “I would have bet you everything I had that I wouldn’t be looking at a Maserati showroom. Or space going for $2,000 a square foot.”